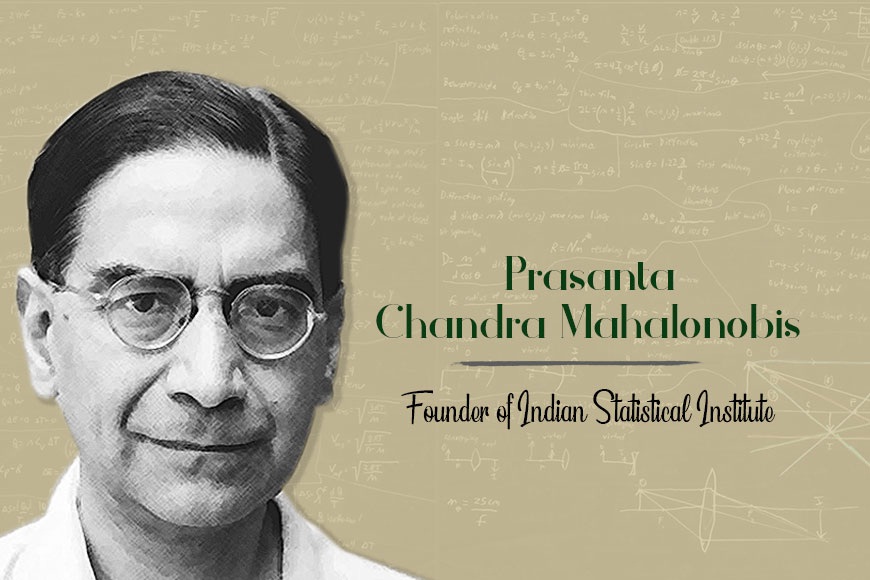 June 29th has been designated as the ‘National Statistics Day’ since 2007 to commemorate the birth anniversary of late Prof Prasanta Chandra Mahalanobis, the renowned statistician of India.

This year, the country is celebrating the 16th National Statistics Day. This year’s theme is ‘Data for Sustainable Development’.

It may be recalled that the Sustainable Development Goals (SDGs) have become the template of development policy. The SDGs are to be achieved over the period 2015-30.

A lot of data is required to monitor the progress of 17 SDGs over time and statistical methods are employed to analyse the data, for example in construction of SDG indices at national and sub-national level. In this respect statistics has a very significant role to play.

Mahalanobis was of the view that statistics can play an important role in national planning and development. But he was not an ivory-tower intellectual. He showed that scientific methods can be fruitfully used for finding solutions to practical problems and in decision making for the general welfare of society.

For his pioneering work in diverse fields and laying the foundation of a strong statistical institutional set up in India, he is rightly called as the ‘Father of Indian Statistics’.

The Government of India in 2006 decided to designate his birth anniversary as the ‘National Statistics Day’ and is being celebrated as such since 2007.

Mahalanobis was a great builder of institutions. In 1931, he established the Indian Statistical Institute (ISI) in Kolkata (then Calcutta).

The ISI is now recognised as a premier institution of research and education in the field of statistics and quantitative studies in other social sciences. He also started the publication of the journal ‘Sankhya’ in 1933.

On his initiative ‘National Sample Survey’ now known as NSO was founded in 1950. This is the main organisation to conduct national level socio-economic surveys including the ones used for estimation of poverty and unemployment in the country.

Born in 1893 to an academically oriented family, Mahalanobis completed his early education in Calcutta. He graduated with honours in physics from Presidency College, Calcutta in 1912. Later, he moved to England to study physics and mathematics at the University of Cambridge and completed his Tripos in these subjects.

Just before his return to India, one of his teachers introduced him to the journal ‘Biometrika’ which was founded by great statistician Karl Pearson. Mahalanobis found its articles quite interesting and he bought a whole lot of the volumes of the journal and came back to India.

This was his first exposure to applied statistical work which was to become his lifelong field of research. Upon coming back to India, Mahalanobis joined the department of physics, Presidency College, Calcutta where he rose to become a Professor and Head of the department.

The relevant data was collected along with the Census of 1941. Mahalanobis also ventured into meteorology and problems of flood control. In his work as an applied statistician, Mahalanobis was always innovative and methodical in finding answers to practical problems.

Mahalanobis made enormous contributions in the discipline of statistics but three of his works in this area are considered as seminal. The first relates to his work on anthropometric surveys and discovery of a method of comparing and grouping populations using a multivariate distance measure. This measure denoted by’D^2’ has now been named as ‘Mahalanobis Distance’ which is independent of measurement scale.

The second important contribution of Mahalanobis was in the field of conducting large scale sample surveys. He began his work on sample surveys by estimating area and crop yield of jute crop in Bengal. In the course of his other such studies, he made many innovative methodological contributions in the field of survey sampling including optimal choice of sampling design.

His idea of pilot survey is considered as a precursor to sequential sampling which was developed by A Wald.

Mahalanobis’ third important contribution in statistics was the method of ‘fractile graphical analysis’ which could be used for comparison of socio-economic conditions of different groups of people.

Although Mahalanobis was not a trained economist, he is well known for his model of planning- ‘Mahalanobis Model’ and this was the basis of the Second Five Year Plan (1956-61) of India. The model has two versions – one, a two sector model and a four sector model .The industrialisation strategy which was the outcome of his model laid emphasis on the promotion of heavy industries and giving priority in investment to capital goods sector.

He proved mathematically in his model, that this strategy, sometimes called ‘Heavy Investment’ strategy would lead to faster growth of economy in the long run. In this strategy public sector was also given a prominent role.

In retrospect, the results of this strategy might have not been spectacular but it laid the foundation of a diversified industrial structure in India and helped to a great extent in achieving the objective of self-reliance.

Mahalanobis was a member of the Planning Commission of India during 1955-1967. He also held the post of Honorary Statistical Advisor to the Government of India since 1949 till his death in 1972.

Mahalanobis held many international and national positions during his illustrious career. He served as the Chairman of the United Nations Sub-Commission on Statistical Sampling from 1947 to 1951.

He was a fellow of Royal Society of London, Fellow of the American Statistical Association, and Honorary President of the International Statistical Institute. In 1968, Mahalanobis was awarded the country’s second highest civilian honour the ‘Padma Vibhushan’ for his contribution to science and service to the nation.

Mahalanobis was not only a scientist of repute but also had an abiding interest in cultural and educational pursuits. He was very close to Noble Laureate Rabindranath Tagore and helped him in establishing and running of the Visva- Bharati University at Shanti Niketan.

Mahalanobis was an intellectual giant of his time and left a rich legacy of work. In today’s world, where ‘Big Data Analytics’ has emerged as a niche area of research, and ‘Data is new oil’ of economy; his works and innovative approach find a contemporary resonance.

His advocacy of industrialisation being given priority and his vision of a strong self-reliant India had been proven correct as now policy makers have given a renewed emphasis to manufacturing by launching the ‘Make in India’ programme and more recently ‘Aatmanirbhar Bharat Abhiyan’.

Mahalanobis’ persona and his works dedicated to the service of nation will continue to guide and inspire the present and future generations.