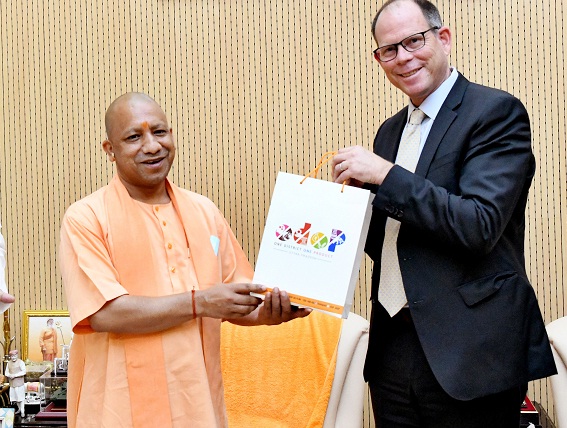 The Covid management of Uttar Pradesh was better than that of the United States of America (USA), Bill & Melinda Gates Foundation (BMGF) said on Thursday.

Lauding UP for showing a model of Covid-19 management for the entire world, BMGF CEO

Mark Suzman said the Foundation was working in several countries and as such he had observed their respective Covid management templates.

“However, it would be fair to say that the Covid management of India and especially Uttar Pradesh was better than the US,” he claimed.

He noted the manner in which the state had tackled the pandemic despite a large population and diverse social challenges was commendable.

Suzman led a BMGF delegation to call upon chief minister Yogi Adityanath at his official residence in Lucknow.

Meanwhile, the Foundation has expressed willingness to partner with the UP government in verticals such as agriculture and self help groups (SHG).

On his part, Yogi acknowledged the contribution of the Foundation in the fields of health and nutrition, as well as facilitating faraway reach and effectiveness of the government schemes.

In fact, the BMGF has been providing technical support in the agriculture domain too.

“Recent reports have reflected the unprecedented improvement in the health and nutrition sectors, wherein UP has scored higher than the national average in some matrices. The Foundation has been supportive in these areas as well,” Yogi underlined.

Besides, the BMGF has supported the state during Covid-19 with regards to making available testing kits and setting up dedicated Covid hospitals in UP.

Meanwhile, the CM said there was a lot of potential for development in the agriculture field.

UP alert over Covid mutant ‘Omicron’

“UP has abundant water and fertile land resources. Over the past five years, Prime Minister Narendra Modi has encouraged farm diversification in the state and use of technical intervention in agriculture,” he added.

UP inching to 150 million fully vaxxed