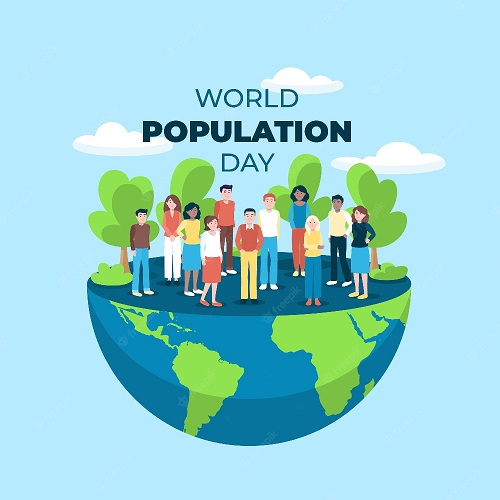 Ahead of the World Population Day (July 11), let us have a close look at the current scenario of population in Uttar Pradesh.

There are certain indicators that give some comfort on the population front. For the first time in five decades, decadal rate of growth of population in UP declined to 20.23% during (2001-2011). It marked a considerable decline from the earlier decadal (1991-2001) growth of 25.85%.

The latest projections of population for India and states for the period 2011-36 by the ‘National Commission on Population’ (2019), forecast a faster decline in Total fertility Rate (TFR) and a slower growth of population in the coming years.

However, some of the demographic indicators of UP do not present a satisfactory picture and are a source of concern. As per the latest Sample Registration System (SRS) Bulletin, May, 2022, CBR for UP is 25.1, the second highest in India and given a Crude Death Rate (CDR) of 6.5 it results in a Natural Growth Rate (NGR) of 18.6 which is relatively quite high; in fact, second highest in India after Bihar.

Under ‘Mission Parivar Vikas’ launched in 2017, among the 145 districts identified in India, i.e. those having TFR=3 or more; 57 districts belong to UP.

The Reproductive Child Health (RCH) indicators in UP are: Antenatal Care (ANC) 26.4%; Full Immunisation of Children (12-23 months) (78.4%); Institutional Deliveries (83.4%) and Malnutrition among Children indicated by stunting (39.7%) and MMR (2017-19)=167 do show an improvement in comparison to previous Survey, but when compared to all India average or developed states there is a long way to go for UP before demographic/health indicators look satisfactory.

According to the Composite Health Index constructed by the NITI Aayog, with a score of 30.57 for the year 2019-20, UP is at the bottom among all the states. All these facts call for strengthening and expansion of the health infrastructure in the state. Covid-19 pandemic has dramatically exposed the inadequacies of the health system.

However, it goes to the credit of the Yogi Adityanath government that it has taken steps to improve the health infrastructure in UP inter alia by proposing to open medical colleges in all the 75 districts.

Schemes like Aayushman Bharat and opening of Jan Oshdhi Kendras are also providing help to people. However, there is still a need to increase the number of health personnel and improve primary health care facilities.

It is to be understood that due to the population momentum built over the years, UP will continue to experience huge population pressure in years to come even after attaining the replacement level of TFR=2.1.

The large and rising population of UP poses a myriad challenges to the state. Many social, economic, and environmental problems are direct outcomes of the large size of population.

Large population puts enormous pressure on public utilities like water, sanitation, health, housing, education, transport, power, and communications and even on administrative machinery. Even to maintain the existing level of these facilities requires huge amount of resources.

Unbridled growth of population also affects environment. It leads to land depletion and degradation, scarcity of non-renewable natural resources, pollution, ecological imbalances and in general, deterioration in the quality of life. It is also reflected in the increasing density of population. Density of population in UP increased from 250 in 1951 to 829 per square km in 2011.

As per projected population in 2021 the population density is expected to be 958. With a large population, there would always be a race between the limited economic opportunities and ever increasing number of claimants for them. This often results in social tension and strife.

The upshot of the above is that there is an urgent need for comprehensive policy initiatives to control and stabilise population in UP. The first population policy of UP was formulated way back in 2000. Its period was 2000-16. It may be recalled that Prime Minister Narendra Modi in his address to the nation on August 15, 2019 said, “Today from the ramparts of the Red Fort I want to address the issue of population explosion in the country.”

“A small section of society, which keeps their families small, deserves respect. What they are doing is an act of patriotism,” he said. Endorsing his views, Adityanath in 2019 said, “Everyone should get good health services, better education, roads, drinking water and other basic facilities and this is possible only when we control our population.”

The policy aims at increasing the accessibility of safe contraceptive including a proper system for safe abortion. Further, provisions for care of elderly people and better education, health and nutrition of adolescents between 11 to 19 years of age are proposed to be made. The policy stated the state would attempt to maintain a balance of population among the various communities.