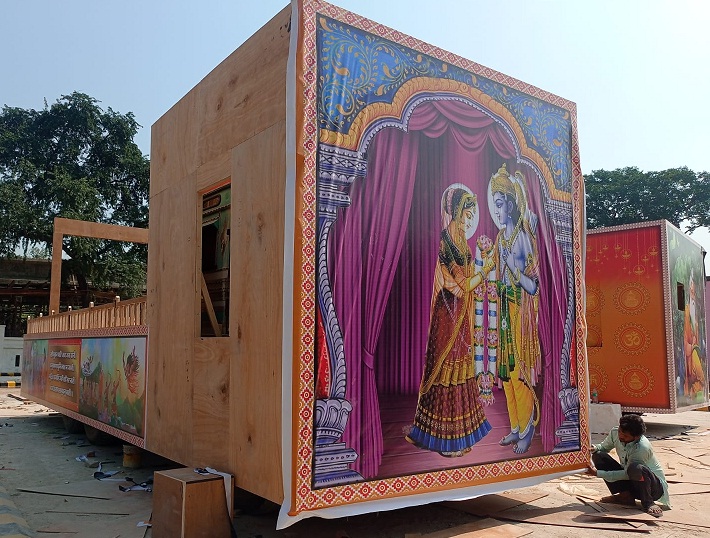 The ancient town of Ayodhya, believed to be the birthplace of Lord Ram, is bedecked for His mythological homecoming on the occasion of the festival of lights, Diwali.

To reprise the ambience of the Ramayan era or the mythical ‘Tretayug’, the Ayodhya is adorned with a series of ‘Ramayan gates’ and tableaux.

Now, Ayodhya is bracing up to welcome devotees and tourists from all over the world for celebrating Diwali and other key events associated with the festival.

Even as the temple town gears up for a grandiose ‘Deepotsav’, the Uttar Pradesh government and the local residents have voluntarily collaborated to celebrate Lord Ram’s glorious return to Ayodhya after a 14-year exile to the forests, according to the Hindu holy text.

To take the motley visitors down the history lane on the festival of lights, the holy city has been beautified with hoardings and banners depicting tales from Ramayan.

About 30 colourfully decorated welcome gates have been put up for Deepotsav. These gates have been named after Ramayan pantheons including Lord Ram, His consort Sita and other mythological characters.

Besides, selfie points have been installed at vantages points to allow visitors to capture the moments for posterity. This time, 16 tableaux, including animated ones, have been prepared.

Meanwhile, the Deepotsav event in Ayodhya is being organised by the UP tourism and culture department.

UP tourism principal secretary Mukesh Meshram said people were now becoming aware of the rich culture, heritage, traditions and history of India due to the unflinching efforts of his department.

The state government is branding the Ayodhya event with the vision of ‘UP Nahi Dekha, Toh Bharat Nahi Dekha’ (You did not see India, if you missed out on seeing UP).

Estimated 400 million to congregate for Mahakumbh in UP