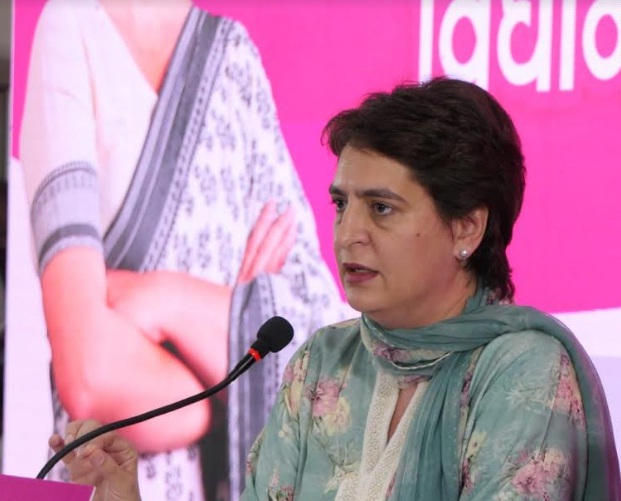 Ahead of the crucial 2022 Uttar Pradesh polls, Congress general secretary Priyanka Gandhi Vadra on Wednesday released the party’s ‘pink manifesto’, which promises a slew of women centric schemes if voted to power.

Congress, which has been in the political wilderness for the past three decades in the country’s most populous state, talked about 40 percent quota for women in government jobs if it forms the next UP government.

Addressing the media in Lucknow after releasing the manifesto booklet, Vadra observed she wished if other political parties also toed a pro-women line in their respective UP election manifestos.

“We have reserved 40 percent seats for women in the coming UP polls to make a difference on the ground and to facilitate real women empowerment beyond just hollow promises,” she said, recalling it was Congress which had given India’s first women prime minister (Indira Gandhi) and UP’s first women chief minister (Sucheta Kripalani).

She lamented in the Lok Sabha and respective state assemblies, women representation was less than 14 percent.

Vadra claimed the share of working women in UP was less than 10 percent, and the promise of 40 percent government jobs to women would translate into 800,000 jobs out of the party’s promised 2 million government sector employment.

Meanwhile, the grand old party (GOP) has pledged to incentivise those companies, which provide 50 percent jobs to women. The women helmed business entities will be encouraged with tax and other sops, while special hostels would be set up in big cities for working women.