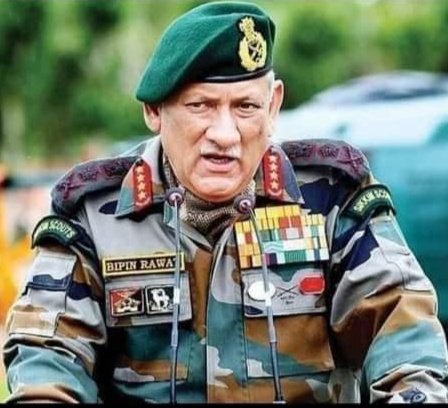 Prime Minister Narendra Modi has pledged to realise the unfinished defence and military roadmap of Chief of Defence Staff (CDS) Bipin Rawat, who died in a helicopter crash in Tamil Nadu on December 8.

Addressing a public meeting in Balrampur district of Uttar Pradesh on Saturday, Modi paid glowing tributes to Rawat, whom he described as a valiant soldier and selfless warrior. “His passing away is a great loss to every patriot.”

Reciting a verse from the Hindu religious text of Gita, the PM observed Rawat, from his new abode, would now witness India marching ahead. “We will continue to progress according to the vision of CDS Bipin Rawat about strengthening India’s frontiers, attaining army’s self reliance and greater coordination among the three defence services.”

Modi noted although India mourned Rawat’s demise, yet the country would not slow down its pace of development. “The entire country vouches for the dedication of CDS Rawat, who was steadfastly committed to upholding India’s honour.”

He asserted the nation will unite and strive harder to overcome the “internal and external” challenges for making India stronger and prosperous.

Earlier, the PM inaugurated the nearly Rs 10,000 crore Saryu Nahar National Project, which was stuck for more than 40 years.

Modi said optimal use of resources, including water, was the key to ensuring long term progress of the country, which he termed as one of the top priorities of the central government.